1953 - 2004
Even as a boy, Byron "Scooter" Lawing loved fast cars and working with his hands. As a teen, he hated rules and dropped out of school in the seventh grade, eventually earning his diploma in prison.

FORT WORTH - Even as a boy, Byron "Scooter" Lawing loved fast cars and working with his hands. As a teen, he hated rules and dropped out of school in the seventh grade, eventually earning his diploma in prison.

By his mid-20s, however, Mr. Lawing had melded his mechanical skills and a new love of motorcycles into a passion that took him around the world and helped him make the friends who came together after his death Thursday at age 51.

For his biker buddies, it seemed only fitting that his Monday funeral will be held at the Wino's Crew Motorcycle Clubhouse, which Mr. Lawing co-founded in 1997 to honor famed biker Wino Willie Faulkner, on whom a character in the 1953 movie The Wild One is based.

During a 48-hour vigil that began Saturday at the clubhouse on East Lancaster Avenue, Mr. Lawing's friends shared stories of the man they described as a "pit bull shoved into a Chihuahua body."

With the open casket containing Mr. Lawing's biker-attired body behind them, his pals recalled his skill as a motorcycle fabricator, his tattooing talent, his practical jokes, his generosity and his fierce loyalty to his biker family.

Friends said Mr. Lawing was a student of motorcycle lore and had appeared in documentaries on the History and Discovery channels.

Mike Carruthers, who owned an Arlington bar in the 1980s, recalled police forcing him to erect a sign outlawing Harley gear after a shooting at the club.

When the sign disappeared, Carruthers suspected that Mr. Lawing had taken it.

"I rode to Scooter's house, and there it was over his door -- upside down," he said.

Acting club president Joe B., who wouldn't give any other name, recalled Mr. Lawing tattooing an off-color slogan on his arm as he slept. He also remembers his insides burning after he was forced to make good on Mr. Lawing's $10 bet that Joe B. could eat more jalapeños than other bikers.

"That's the kind of stuff Scooter did," Miller said. "He wasn't a big scary biker. He liked to do things to make people laugh."

That apparently held true even when Mr. Lawing was trying to make a statement.

In 1997, Fort Worth club members traveled to Hollister, Calif., to commemorate the 50th anniversary of a biker rally on which The Wild One is based.

To re-enact the scene where officials kicked Wino Willie out of Hollister in 1947, Mr. Lawing began doing wheelies and smoking the tires of his motorcycle on Main Street, Joe B. recalled.

Police offered to let Mr. Lawing leave town instead of going to jail if he could get the booing crowd to back off.

"They backed up, and we rode out of town with a police escort," Joe B. said.

Mr. Lawing's wife, Susan, said club members gave him an autographed canoe paddle "as a symbol of him stirring up the pot." That paddle rested against his casket Saturday.

But Mr. Lawing was as generous as he was fun, friends said.

A biker known only as Bobby said that when his motorcycle broke down after he left a camp-out, Mr. Lawing stopped to repair the motorcycle, then loaded it into his pickup and took it to the clubhouse for more work.

"What impressed me most was that he was prepared to take care of me instantly by the side of the road when he had just met me," Bobby said. "He nicknamed me 'Push Rod' because I bent my push rods adjusting them when the bike was hot."

Susan Lawing, who married Mr. Lawing 11 years ago after both lost spouses, said she is grateful that her husband didn't linger long after he suffered a massive stroke two weeks ago that would have left him paralyzed.

Joe B. said club members will celebrate his life with a party after the Monday funeral. A motorcycle escort will accompany his body to the Mid-Cities Funeral Home in Haltom City. His cremated remains will be returned to the club and placed alongside Wino Willie's urn.

"He always said the hardest thing in life was paying taxes," Joe B. said. "He said dying was the easiest thing to do. It was his wish that everybody come back here and have a big old party."

Visitation continues until the funeral at 1 p.m. Monday at the Wino's Crew Motorcycle Clubhouse, 3132 E. Lancaster Ave., in Fort Worth. Motorcycle procession to Mid-Cities Funeral Home, Haltom City, for cremation. 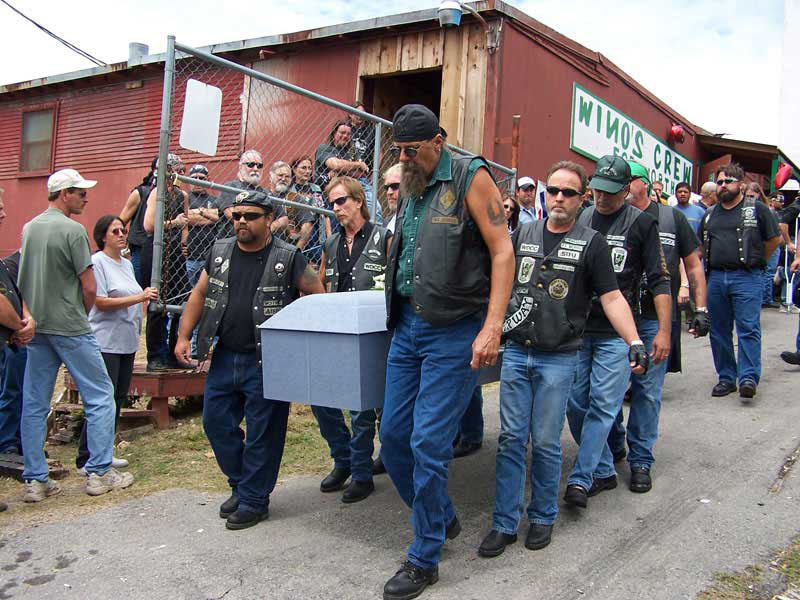